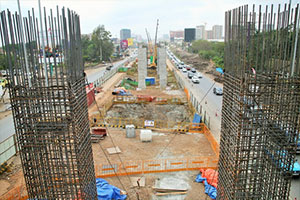 Kenya National Highway Authority (KeNHA) have signed a major deal of 17.9 billion shillings (about 166 million U.S. dollars) with a Chinese Construction firm. The partnership is to construct a 453-km road that is part of the Lamu Port-South Sudan-Ethiopia Transport (LAPSSET) corridor project.

The road construction encompasses of 257-km Lamu-Ijara-Garissa section which is part of the LAPSSET project in addition to the Hindi-Bodhei-Basuba-Kiunga section which covers around 113 km and the Ijara-Sangailu-Hulugho section which extends 83 km.

Director General of KeNHA, Peter Mundinia, mentioned in a statement that the tender award agreement is for stage construction of the LAPSSET development project and related spur roads in the countryâ€™s southeast region.

The project is anticipated to endorse regional socio-economic improvement along the transport corridor, especially in the Northern, Eastern, North-Eastern and Coastal parts of Kenya, areas which are considered as economically marginalized.