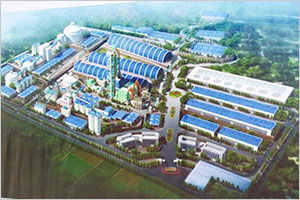 The government of Ethiopia led by President Sahlework Zewde on Thursday 4th March 2021 laid a foundation stone for the construction of Lemmi Industrial Complex project in Ensaro district of Lemi town in the central region of the East African country.

The facility will be built on a 270 hectares piece of land by a joint venture between East African Holding, a leading industrial group in Ethiopia that has endorsed a prominent role in the industrialization of the country, and West China Cement Limited (WCC), a leading cement manufacturer and distributor in North Western China at a cost US$ 2.2bn.

The first phase of the project is expected to be completed in a year and a half.

The realization of the entire industrial complex that according to authorities will include large factories producing cement, glass, gypsum, etc., will not only fulfill the countryâ€™s efforts to substitute imported products but also help to reduce the growing demand for construction materials to some extent. It will also create jobs for up to 10,000 people, and inspire local development.

Agreement for construction of agro-industrial Park in Nekemte

In related news, Ethiopiaâ€™s Oromia Industrial Parks Development Corporation and Walabu Construction Share Company have inked an agreement for the construction of an agro-industrial park in Nekemte a market town and separate woreda in the western region of the country.

The park will be put up on a 250 hectares piece of land within a timeframe of 36 months at a cost of close to US$ 192m entirely provided by the Ethiopian government.

Upon completion, the agro-industrial park is expected to attract foreign and domestic investors engaged in agro-processing products to be exported for the international market, accommodating a variety of plants used to process coffee, tea, oilseeds and grains, fruits and vegetables, food grains, meat, and poultry products and eggs, honey, and dairy products.