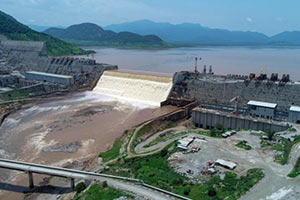 Ethiopia has begun concrete construction on the Grand Ethiopian Renaissance Dam's body, notably on the western side, in preparation for the third filling, according to sources.

During the previous two years, the first and second fills have totalled eight billion cubic metres of storage. Water continued to flow through one of the two drainage holes on April 14, making turbine No. 10 operational. Insufficient storage resulted in the formation of certain islands.

Ethiopia is looking for a third storage capacity of nearly 10 billion cubic metres by expanding the dam by 20 metres, which translates to roughly 1.3 million cubic metres of concrete, which is unrealistic given the amount of time left for the new flood (which begins in less than three months).

The Grand Ethiopian Renaissance Dam negotiations have been legally stalled since April 2021, when Egypt, Sudan, and Ethiopia failed to achieve an agreement before Ethiopia's implementation of the dam's second filling, which began in July. Cairo and Khartoum oppose Ethiopia's insistence on filling the dam before reaching a firm agreement on filling and operation.

Egypt, which is largely reliant on Nile water, is concerned that the GERD may have a negative impact on the country's water supply. Egypt has also demanded provisions to protect downstream countries in the case of drought during the dam's construction. Egypt and Sudan desire a legally binding agreement, whilst Ethiopia wants a consultative arrangement. The project is seen as a threat to Egypt's and Sudan's critical water supplies, but Ethiopia regards it as necessary for expansion and increased energy output.

The downstream nations are concerned about the possibility of harm to water systems, agricultural land, and the Nile's overall supply. Years of delay in negotiations between Egypt, Ethiopia, and Sudan over the project resulted in the three nations failing to reach a clear agreement. The dam, which cost more than four billion dollars, is Africa's largest hydroelectric project. Construction on the dam began in 2011.