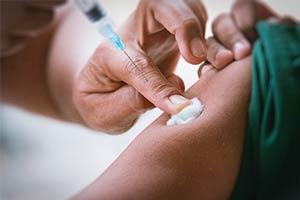 The Health ministry has launched a new vaccine meant to protect people against meningitis A in five target countries as part of routine immunisation.

Meningitis is a bacterial infection of the protective membranes (meninges) that surround the brain and spinal cord.
The campaign was launched at Lodwar County Referral Hospital. The ministry said, "it will target an estimated three million people aged between one and 29 years."
The injectable vaccine will be given in Turkana, Marsabit, Mandera West-Pokot and Wajir, areas considered to be at high risk of contracting meningitis.
The vaccine will also be given in selected immunisation posts during the campaign period, including schools, universities, churches, mosques and any other identified sites in the community.
In 2016, global vaccine experts and officials from the African "meningitis belt" convened in Addis Ababa, Ethiopia, to celebrate the introduction of a vaccine, MenAfriVac®, designed, developed and produced for use in Africa.