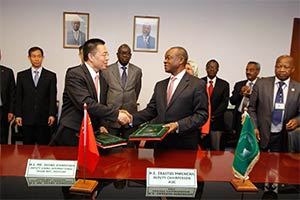 African experts and policymakers have praised China's continous support to African institutions in the public health sector, with particular praise to its contribution towards the institutional and technical development of the much-needed African Centers for Disease Control and Prevention (Africa CDC).

The blossoming China-Africa public health cooperation marked a remarkable milestone when African and Chinese officials revealed the brewing launch of constructions at the Chinese-supported future headquarters of the Africa CDC -the African Union (AU)'s specialized technical agency in the healthcare sector.
The AU Commissioner for Social Affairs, Amira Elfadil, who joined Ethiopian government officials as well as diplomats from the Chinese mission to the AU to observe the special site where construction of the Africa CDC headquarters will soon begin, said that "China has continued to send medical experts here, including their CDC personnel."
Elfadil also disclosed that construction of the CDC headquarters was anticipated to start by 2020.
The Africa CDC's future headquarters is likely to rest on an area of 90,000 square meters on the outskirts of Ethiopia's capital Addis Ababa with close proximity to the AU headquarters.
Upon completion, the Africa CDC would be the best facility for disease control and prevention in the African continent.
Africa CDC Director, John Nkengasong, told Xinhua recently that, as part of China's support to the Africa CDC, two Chinese experts are at present working together with African experts at the headquarters of Africa CDC to develop the center.
"China has remarkably contributed to Africa's ongoing combat against Ebola outbreak as well as to the development of the Africa CDC," the director told Xinhua.
"China has utilized experts in neighboring countries of the Democratic Republic of Congo (DRC)," Nkengasong said, as he described China's contribution as an "important support to identify and stop the spread of the Ebola virus."
He also noted that China has been supporting the Africa CDC which has been taking various activities as part of the response efforts to the latest Ebola outbreak in the DRC.