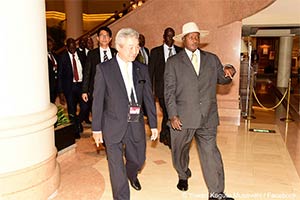 Uganda's President Yoweri Museveni told the Japanese investors, "we have made our own hybrid solar powered car and bus. We can make partnerships with you to make solar powered batteries."

President Yoweri Museveni has called on Japanese investors to exploit Ugandas's advantageous investment opportunities and partner with government to promote trade and development.
In August 2019, Museveni met several potential investors in solar power panel production, medical infrastructure (Hospitals) and logistics at his residency at the International Hotel, Yokohama, Japan.
During the meet, the delegation expressed interest in clean energy, particularly production of solar panels, Health infrastructure like hospitals in partnership with government, logistics and transportation.
This year, Museveni attended the Tokyo International Conference on African Development (TICAD) at Japanese seaside city of Yokohama, where he also joined the other world leaders.
This year's conference was based on the theme, "Africa and Yokohama, sharing passion for the future."
This is hosted by the Japanese government and is co-sponsored by the United Nations, the United Nations Development programme (UNDP), the African Union Commission and the World Bank.
Museveni told the investors, "our government is working to stop our people from seeking medical aid in foreign countries. We want to build our own hospitals in Uganda. We can support investors with land for such infrastructure."
The conference was also attended by the other African leaders.