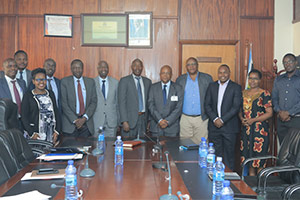 The Petroleum Authority of Uganda (PAU), the Ministry of Energy and Mineral Development (MEMD) and the Uganda National Oil Company (UNOC) introduced a Kenya delegation from the Ministry of Petroleum and Mines.

The two-day official visit focused on benchmarking and familiarization as the republic of Kenya also follows to the process of setting up a Petroleum Regulatory Authority.

The three institutions conducted a series of meetings with the five-man delegation led by Mr. James Ngâ€™angâ€™a [Kenya] the Ag. Secretary Petroleum at the Ministry and the PAUâ€™s offices in Kampala.

â€œUgandaâ€™s partnership with our Kenya counterparts in the oil and gas sector dates to the 1990s when both countries were receiving data to promote the sector in the region.  It is substantial to keep up the momentum to collaborate and learn from each otherâ€™s achievementsâ€, said Mr. Robert Kasande, Permanent Secretary, MEMD, Uganda.

Mr. James Ngâ€™angâ€™a revealed that the objective of the Kenyan Government is set to put up a regulatory institution with structures, business processes, operating procedures and relevant job profiles.â€œIt is in this regard and recognition of the efforts of the Government of Uganda towards the mighty establishment and functioning of the Petroleum Authority of Uganda that we are here to learn from you how we can as well set up a similar institution,â€ said Mr Ngâ€™angâ€™a said.

The Petroleum Authority of Uganda was established by Ugandaâ€™s Upstream Petroleum Act of 2013, and came into operation in October 2015 when the Board of Directors was appointed and the Executive Director recruited in September 2016.

While Kenyaâ€™s Petroleum Act 2019 sets the establishment of a Petroleum Regulatory Authority to monitor and control the exploration, development and production, together with the refining, gas conversion, transportation and storage of petroleum.

Mr. Ernest Rubondo, the Executive Director PAU highlighted the need for the Government of Kenya to clearly define the roles and objectives of the regulatory institution.

â€œDifferent countries have different models of institutional set up for the oil and gas sector; therefore, the objective must be clear from the start.  This will guide the selection of the personnel to run the Authority, which must be aligned to your objectives, thorough and based on expertise, experience and merit,â€ said Mr Rubondo.

The Kenyan delegation had an opportunity to further engage with the technical teams from the institutions and have a deeper understanding of the role each entity plays and the lessons learnt during the transition.

Mr. Kasande cautioned the visiting delegation on the need to manage the transition especially in terms of staffing and the importance of clear separation roles of between the established and new institutions.

â€œOnce the institutions are established, you must separate the roles, have comparable budget lines so as not to have all your technical officers leaving one institution to go to the other due to differences in operational budgets,â€ Mr Kasande said.

The PAU highlighted its strategic direction, how it undertakes its key regulatory functions, the staffing and skills required and the outlook for the sector.

The delegation visited the PAU and Directorate of Petroleumâ€™s(DoP) offices premises in Entebbe where they were taken through the different software, databases and applications used in regulation, the core store and laboratories and the ongoing construction of the PAU and DoP office premises that will host the National Petroleum Data Repository and modern Laboratories in Entebbe.

â€œThe regulatory functions of the PAU are set out with a focused direction indicated in the institutional manuals that have been put in place. The institutional systems are well-coordinated, with radiant and passionate staff administering systems such as the National Suppliers Database and the National Oil and Gas Talent Register.â€ Mr Ngâ€™angâ€™a said.

The East African partner states have continued to work closely to promote and grow the emerging Oil and Gas sector under forums like the East African Petroleum Conference and Exhibition (EAPCE) that is held biannually.

And Uganda will host the next edition slated for 2021 after Kenya hosting the 2019 edition in May in Mombasa where Uganda announced its Second Competitive Licensing Round five blocks.