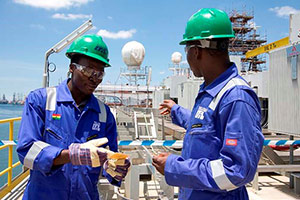 According to Tullow, oil from the Lokichar Basin is set to cost US$25/bbl. to extract and transport. However, the aspect of transportation is yet to be resolved, making their estimates doubtful.

An examination by the Oxford Business Group indicates that there is a relatively high wax content in the oil, which could put a dampener on the final production price â€” likely to trade less than the global benchmark of Brent crude.

From a production perspective, BP expects natural gas output to increase by 50 % across Africa by 2040. This production is, however, contingent on the development of gas reserves in East Africa.

While Kenya is boosting up its crude oil production, it is also prospecting for gas. Its neighbouring Tanzania expects construction of its LNG export project to commence in 2022.

The US$30bn project is to be built in the Lindi region by Norway-based Equinor, Royal Dutch Shell, Exxon Mobil, Ophir Energy and Pavilion Energy, in collaboration with Tanzania Petroleum Development Corporation.

In Kenya, Tullow has indicated that it is continuing to explore additional gas reserves in the country. This comes after the discoveries made in early 2012 and 2013 which proposed that Kenyaâ€™s gas reserves could be the largest deposit in the region.

The discoveries have meant that companies like Tullow and Zarara Oil and Gas (Mauritian firm) have been able to broadly explore the country with positive outcomes.

While the sector remains in its infancy in Kenya compared to Tanzania, the report mentions that politics could easily push Kenya to the top of the East African ranks in gas production (and potentially oil as well) over the next decade.