Sh2.5 billion loan has been approved for the construction of a gas hub in Mombasa, Kenya. 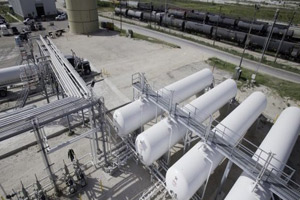 The International Finance Corporation announced the money on June 2 after the company received regulatory approval from the national and county governments to start building.

The terminal will include a private berth for unloading mid-sized LPG carriers, an onshore storage whose capacity is 22,000 metric tonnes and associated infrastructure that will have multiple landing points for transfer of LPG to transport vehicles.

"This project will underpin Kenya's ambitious goal for sustainable economic development. We are aiming to complete construction of phase one and begin operations within six months," said Mr Irungu.

MGT will use tanks to transfer the gas by trucks to the Standard Gauge Railways (SGR) yard in Port Reitz, from where the commodity will be transported to Nairobi and other parts in the country.

Mr Irungu said supply of cooking gas is set to increase following the construction of the terminal, setting the stage for drop in consumer prices.

The import handling and storage unit is also expected to help relieve demand pressures through reduction of stock-outs.

This led to cooking gas shortages and expensive LPG due to high import premiums and demurrage, which are penalties marketers pay shipping companies when tankers fail to offload in the stipulated time period.

The price of the 13-kilogramme cooking gas has fallen from Sh3,200 in August 2014 to the current average of Sh2,000, according to the Kenya National Bureau of Statistics, reflecting a drop of 37.5 per cent.

This has helped wean households off dirty fuels like kerosene and charcoal for cooking.