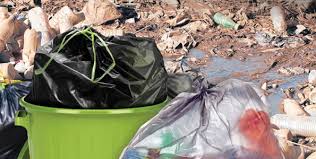 Kenya is headed for a showdown with its regional partners as it seeks to protect jobs in plastic manufacturing, with Rwanda and Tanzania pushing for a ban on plastic bags in the region.

A Bill seeking the ban will be debated in the upcoming East African Legislative Assembly sittings in Kampala.
During the Nairobi sittings in November last year, the EAC Polythene Materials Control Bill, 2016 moved by Rwanda's Patricia Hajabakiga, which was expected to go through its third and fourth reading, was removed from the Order Paper to allow for consultations, after the Kenya Association of Manufacturers raised objections.
Non-biodegradable plastic bags have been cited as a top environmental nuisance across the region, but Kenya is adamant that a total ban will devastate its manufacturing base, with huge job losses expected. Nairobi alone handles 86,000 bags daily.
At the start of this month, Tanzania followed Rwanda in effecting a total ban on plastic bags, which is also expected to hit Kenyan manufacturers hard, as the country has been a major export market.
Before the sitting in Nairobi, EALA said the Bill aimed at providing a legal framework for the preservation of a clean and healthy environment through the prohibition of manufacturing, sale, importation and use of polythene materials.
The EastAfrican understands that Kenya will still oppose the debate in Kampala, as select stakeholders under KAM have been tasked to lobby EALA members to throw it out.
"We held a meeting in November in Nairobi where it was agreed that we lobby EALA members not to pass the Bill if it came up for debate in the Kampala meeting. We are yet to meet with the Kenyan legislators in the regional assembly so as to get a common position," a source told The EastAfrican.
But what will complicate Kenya's appeal is Tanzania's recent ban, with Uganda said to be also considering an amendment to its 2009 law to effect a total ban.
In April 2015, Kampala banned the selling, manufacture and importation of lightweight bags but just like Kenya, the country's $9 million plastic recycling industry -- which directly employs over 6,000 people -- protested, leading to its suspension.
The region's parliament had hoped that pushing the debate to January would help build consensus among member countries and defuse the divisions generated by the Bill.
Kenya has offered a counter proposal that would see it introduce adjustments to polythene bags specifications and a special tax by the Treasury that will allow its environmental watchdog -- the National Environment Management Authority -- to manage the waste.
However, Kenya is being accused of stalling the passing and enactment of the law without offering a good counter proposal.
"The frustration we have with Kenya is that its record on regulating polythene has been poor. Its 2007 increase in tax was suspended and has never been implemented.
Since 2011, when the first attempt was made to ban the plastic bags, the country has stalled the initiative; yet we haven't seen any conclusive proposals from Nairobi on this and that's why we are determined to pass it," a member of EALA told The EastAfrican.
However, KAM chief executive officer Phyllis Wakiaga said that while Kenyan manufacturers are committed to proper waste management, the enactment of the law will deal a big blow to the sector, which employs more than 30,000 people.
"It won't augur well for local industries. We need to understand that in the past few years, we have seen a slowdown in growth in this sector due to excise duty and imports," said Ms Wakiaga.
Data from the Kenya National Bureau of Statistics shows that there are more than 30 plastic manufacturing units in the country with annual sales worth $406.35 million. In the last quarter of last year, Kenya exported plastic products worth $9.52 million, with a majority of them going to Tanzania and Uganda.
In August last year, Tanzania's Deputy Minister for Environment Affairs Luhaga Mpina said the ban would exempt plastic bags used in medical services, industrial packaging and in waste management.
In December, Rwandan president Paul Kagame rejected pleas by plastic manufactures to lift the 2006 ban on their products. He said his government would examine ways of supporting the country's packaging industry.