TIMBER PRODUCTION RAMPS UP IN RWANDA 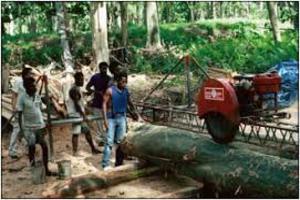 By the year 2020 Rwanda has targets of achieving 30% of the total surface area as forest cover. Before the year 2020 at least 714,102 hectares are expected to be forest reserves is what this means along with more than 107 small size forests across the country.  In 2018 the government estimated that forest cover was around 29% from 25.9% in the year 2010.

Creation of synergies among stakeholders in the sector is what the officials say in order to maximize impacts of conversation as well as forestation efforts. They have already established nurseries for new trees as they were ready to commence planting in the New Year said the firm's Managing Director Agnis Magelinkas of Sawmill East Africa.

Post signing of an agreement with the government sawmill East Africa began its operations in Rwanda. The firm is involved in the production of high-quality wood not only for carpenters but also the construction industry.

In a deal aimed at adding value to the sector of forestry Sawmill East Africa signed an agreement with the government to harvest and manage four state forests in order to reduce the country's import bill on timber.

We have built nurseries to grow young trees and plant millions of them at the start of the coming year, planting is important for the coming generations in Rwanda to be able to relish and delight themselves in healthy forests, and we give full attention to the future wood industry as well," said Mr. Magelinkas. As they are the first wood production industry in Rwanda noted the Director they are keen on investing in innovative technologies as the wood drying kiln machines, naturally available chemicals for preservation and such other things. Launching very powerful modern machines designed and adapted especially for Rwanda's industrial needs and the wood type of the region, as we have invested into the main quality of main focal point-speed. In the near future we are planning to continue our investment in machinery, modern technologies and people training," he quoted.

In the southern part of the country the firm has rights to manage, exploit and replant four forests at Rusizi Muhanga a district of Huye. Launching its initial operations in Muhanga is the first phase of the operation. The firm has thus created 300 job opportunities so far. Tasked with maintaining environmentally friendly practices in the harvesting process the firm is also in the process of replanting new forest to maintain forest cover.