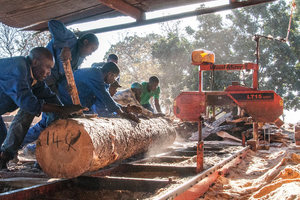 In a deal aimed at adding value to the forestry sector, to promote imports and reduce the country’s exports bill on timber. Sawmill East Africa is set to build a wood processing factory in an agreement which was signed between Sawmill East Africa and  the Government of Rwanda to harvest and manage four state forests. The agreement was signed between the Government, through Rwanda Development Board, the Ministry of Land and Forestry on one hand and Sawmill East Africa on the other.The factory is under construction at the Rwamagana Industrial Park and is scheduled to be completed by the end of October 2019. This statement was made by Agnis Magelinskas the CEO, she said this without disclosing the size of the investment. Under the terms of the agreement, the firm will have the rights to utilize the forests, produce furniture and other products as well as replant the forests. Sawmill will manage, utilize and replant four forests in the southern part of the country in Rusizi, Muhanga and Huye.

The deal is set to usher in ideal use of forest resources as part of efforts to reduce export of wood products and furniture to other countries said The Chief Operating Officer of RDB, Emmanuel Hategeka. He mentioned that the agreement also aims to serve Rwanda’s import promotion strategy to diversify and improve value addition and reducing exports. The firm will seek to add value to the wood processing sector building on raw materials to have complete manufactured products.

The firm’s management said that the deal will transform the local forestry sector into a profitable wood products’ market for furniture, building materials for domestic, regional and international markets. Sawmill East Africa will also be required to replant trees. Magelinskas the CEO proclaimed that the firm will work with local carpenters and build capacities on production of various products and furniture. It plans to create 400 jobs in its first year of operation. However, some conservationist called on the Government and Sawmill East Africa to implement the deal with caution, arguing that harvesting the forests could derail the country’s ambitions of attaining its forestry coverage target of 30 per cent of the total surface area by 2020.

This means at least 714,102 hectares are expected to be forests reserves before the year 2020. The Government estimated that forest cover was around 29 per cent in the year 2018, from 25.9 per cent in 2016. Since there are more than 107 small size forests across the country. The Government’s target largely relies on agro forestry.

Hategeka allayed the concerns raised by environmental activists, saying that increasing forestry and conservation is one of the key contents of the agreement to ensure that gains made in recent years are consolidated. The Minister for Land and Forestry, Francine Tumushime, conveyed that previous efforts (in increasing forest cover) have laid a foundation for the initiative. In 2018, New Forest Company signed an agreement with the Government to harvest Nyungwe belt reserve trees to produce fine timber and charcoal.