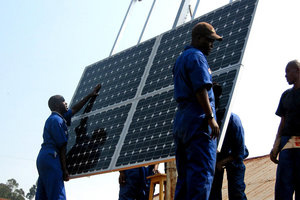 The entrance to the first major solar power farm in East Africa reads a sign “Arise, shine for your light has come.” From a bird’s-eye view, the 8.5 megawatt (MW) power plant in Rwanda is designed it resembles the shape of the African continent. Amid Rwanda’s famed green hills, within view of the Lake Mugesera the setting is magnificent which lies 60km east of the capital Kigali. Above wild grass where inhabitants include puff adders, about 28,360 solar panels sit in neat rows. Backed up by Barack Obama’s Power Africa initiative the government of Rwanda agreed to a joint bid among Scatec Solar, Norfund and Gigawatt Global. After which, construction began in February 2017 and was completed by July the following year. “It was the fastest project in Africa.”

The plant is also evidence, of how nimble renewable energy can be and of its increasing affordability. In just a year the $23.7m (£15.6m) solar field defied the skeptics of Africa’s ability to realize projects fast  went from contract signing, to construction, to connection. Photovoltaic panels which are 9 sq meters each tilt to track the sun from east to west, hence improving efficiency by 20% as compared to stationary panels. This is completely computer controlled and continues from dawn till dusk. The panels are made in China while the inverters and transformers are made in Germany.

By powering more than 15,000 homes, 350 local jobs were created while the plant was under construction. Consequently increasing Rwanda’s generation capacity by 6%.  21 years after the genocide all this was crucial in an economy that aims to give half of its population access to electricity by the end of 2019.

The plant supervisor Waha Twagirimana, one of five full-time staff on-site, had said that “The Rwandan government wants solar to increase capacity."

Sending power to a substation 9km away, approximately 15 million kilowatt hours was produced in its first year itself, which had prompted mixed views in local communities. Local population near the plant say that it would be cheaper if they get energy direct from the plant. But in reality the power is sent to the utility and then gets distributed throughout the grid.  The solar field is monitored remotely via the internet from a system which is linked to a central server based in Oslo. This system of power generation could become a template for the entire continent.

The Rwandan government has mobilized $491 million for a series of projects including the construction of the 56 MW power plant on Lake Kivu. The construction of the plant is part of the Rwandan government’s strategy to increase national capacity from 221 MW to 512 MW by 2024, the year in which Rwanda hopes to increase access to electricity for all its inhabitants to 100%.

Solar will be the way forward for African countries as the continent has plenty of sunlight. For people living in remote areas where there is no energy solar power generation could become the answer to their energy crisis.