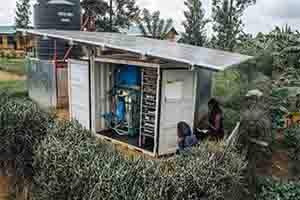 Engie Africa launched a pilot project earlier this month to provide purified water, power and Wi-Fi to off-grid communities in Kigali, Rwanda. The project is being developed through a partnership between Engie Energy Access and OffGridBox, a water and solar company founded in 2016 with offices in Rwanda and the United States. The project ultimately aims to supply 18% of households in Kigali that do not currently have access to power. The project includes backup systems for lighting and phone charging.

An alliance is being formed for solar energy, drinking water and Wi-Fi in Rwanda. This partnership is initiated by Engie Energy Access, the new flagship of French energy company Engie, which now includes Engie Mobisol, FÃ©nix International and Engie PowerCorner. The company, which specialises in decentralised renewable energy solutions, has decided to work with OffGridBox, which supplies containerized systems for drinking water and solar energy.

With 11 shops spread throughout Rwanda that have sold almost 40,000 SHS since 2014, Engie Energy Access, which employs 325 people in Rwanda, says its collaboration with OffGridBox will also help women get jobs, particularly in the management of containerised battery charging and drinking water distribution systems. The project stems from a call for solutions for access to drinking water and clean energy in cities, launched by French giant Engie in Rwanda.

Almost 50% of ENGIE Energy Accessâ€™s customers in Rwanda are Small Business Enterprises. In a country where it is dark from 6pm to 6am, having power means that these businesses have been able to flourish in the evenings. SHS sizes range from 40W to 200W and product offerings include TVs, stereo radios, torches, flat-iron boxes, hair-cutters and Mobile chargers.

Currently, OffGridBox has installed around 80 containers in 13 different countries around the world, including Rwanda, Madagascar, South Africa, Somalia, Nigeria, Tanzania, and the Democratic Republic of Congo (DRC). A pilot project with mining communities in DRC is also under way. The initiative employs and trains local women to run the box using the OffGridBox mobile application.

Engie Energy Access is a pay-as-you-go and mini-grid solutions provider established through the integration of Engie Mobisol, Fenix International and Engie PowerCorner. So far, the company has installed 3.3MW of power in Rwanda, with around half of customers being small businesses, and employs 325 people in the country. Engie Energy Access also operates in Uganda, Zambia, Kenya, Tanzania, Nigeria, Benin, CÃ´te dâ€™Ivoire, and Mozambique.