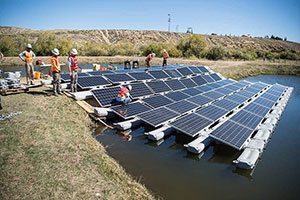 Now the Rift Valley business is targeting to install what Ecoligo claims would be the nations first floating solar project, a 69 kW system on one of the companys two reservoirs.

Ecoligo is aiming to generate Euro 126,000 from small scale investors willing to commit Euro 100-25,000 using its crowdfunding platform and opened the appeal yesterday. The investment term for the project is four years with an estimated 6 percent annual return on offer and a 0.5 percent premium for early bird commitments made before July 19.

The floating project planned would feature German equipment in the form of 216 solar modules supplied by Solarwatt and four Kaco inverters. A Kenyan contractor has been awarded the construction contract.

Ecoligo said it expected 1,628 kWh to be generated annually from each kilowatt installed with all the power produced used by the flower farm.