The Cashew Farmers Got Paid Over 60bn/ - By Government In Tanzania 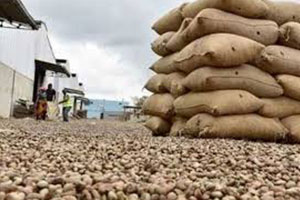 The Tanzania government has paid 60.6bn/-to cashew nuts farmers in Coast Region in the last season 2018/2019 as others wait for the completion of verification exercise to get paid.

"While verification exercise continues farmers whose cashew nuts were taken to the main warehouses will get their payments without any problems ", he said.

The RC updated on the cashew nuts auctioning exercise launched last month, pointing out that a total of 157 tonnes were sold at the launching of which 48 tonnes were of the first grade and 109 were of the second grade.

During the second auctioning exercise which took place, a total of 765 tonnes were sold of which 46 tonnes first grade and other 717 tonnes of second grade.

The Assistant Regional Administrative Secretary (Economy and Production), Mr. Shangwe Twamala said that efforts are being done to get buyers who will buy the remaining cashew nuts straight from the AMCOS after they are thoroughly sorted out.

Already, communications have been made with three buyers who have shown interest in buying the cashew nuts.