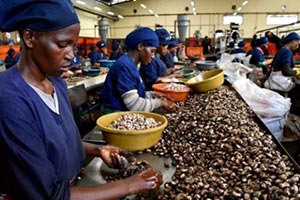 The measures, according to Agriculture minister Japhet Hasunga, include establishing a special fund which would lend agricultural inputs to farmers.

The government has scrapped the Cashewnut Industry Development Trust Fund (CIDTF) for what was described as failure to perform since it was established in 2010. In the event, its responsibilities were immediately shifted to the Cashewnut Board of Tanzania (CBT).

Other measures are to financially empower CBT and the Naliendele Agricultural Research Institute (Nari); increasing the number of cashews extension officers, and trading the produce online - in addition to trading via the current Warehouse Receipt System (WRS).

Reports indicate that cashew nuts production was in decline in the last five years.

The cashew nuts production trend posted on the CBT website shows that 344,000 tonnes of cashew nuts were produced in the 2015/16 farming season. This increased to 358,000 tonnes in 2016/17. Implementing news strategies will make it to increase more in coming years.