The Government of Tanzania lists priorities to encourage agriculture 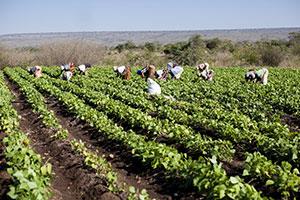 The Ministry of Agriculture has identified seven areas where the government will focus in the 2021/22 fiscal year to support the major economic sector's growth.

Research, seed development, and extension services are among them. Others include expanding the area of land available for irrigation farming, boosting agricultural crop markets, providing access to low-cost agricultural loans, and improving pest and crop disease preparation.

When presenting his docket's Sh294.162 billion budget for 2021/22 to the Parliament in Dodoma, Agriculture Minister Adolf Mkenda stated the goals.

President Hassan claimed inefficiency was the country's biggest problem in agriculture, promising to invest in the sector over the next five years to boost output.

Prof Mkenda stated that putting an emphasis on research through the Tanzania Agricultural Research Institute was the first strategic objective in order to boost efficiency in the sector (Tari).

He stated that an Agricultural Research Development Fund (ARDF) will be established under Section 26(1) of the Tari Act (No. 10 of 2016) to provide money for long-term research.

Furthermore, he stated that seed multiplication was the second priority in order to minimize the country's reliance on imported seeds, adding that 13 seeds farms owned by the Agricultural Seeds Agency (Asa) will be developed through the Irrigation Development Fund's provision of irrigation infrastructure (IDF).

He said the ministry's budget for improving extension services, which is the ministry's third priority area, has been boosted from Sh603 million in the 2020/21 fiscal year to Sh11.5 billion in FY-2021/22.

He stated that the cash will be utilised to buy 1,500 motorcycles, soil testing equipment, extension kits, smartphones, and the development of illustrative farms by extension staff, among other things.

â€œThe pilot will take place in the Dodoma, Singida, and Simiyu regions. They have the potential to create cooking oil seeds crops such as sunflower and cotton,â€ he explained.

He noted that another strategic priority area was irrigated agriculture, and that stakeholders' investment would be mobilised, as well as the completion of 13 Asa-owned irrigation systems through the IDF.

Prof Mkenda stated that the ministry will manage partnerships between local crop dealers and counterparts from countries with larger demands, such as South Sudan, the Democratic Republic of the Congo (DRC), Saudi Arabia, the United Arab Emirates (UAE), Mozambique, Kenya, China and Vietnam.

According to him, increasing finance in the agriculture sector was the ministry's sixth priority, and a committee led by deputy minister for Agriculture Hussein Bashe, which included leaders of major financial institutions, was formed to transit through crop value chains and advise the government.

Another group of experts was travelling through the sector and analysing tax structures in order to encourage additional investment in the value chain, he said.

According to him, increasing the country's capacity to combat exotic pests and birds such as desert locusts, larvae, quelea quelea, and others is the seventh strategic priority.