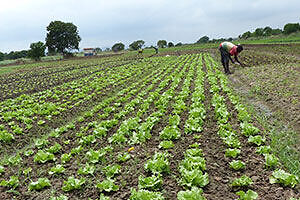 Tanzania will showcase and propose investment prospects and priorities in agribusiness during the summit in order to attract investors to the industry. Tanzania has immense potential to become a major food producer, manufacturer, and exporter.

What we need to do is boost production, offer value, and maintain a high level of consistency. "Countries sourcing agricultural produce and goods from Tanzania will gain trust that we are dependable in the long run, and that this is not a one-time event," Mr Kirenga added.

A cross-section of Tanzanian stakeholders convened in Dar es Salaam at the Southern Agricultural Growth Corridor of Tanzania (SAGCOT) headquarters to encourage additional SMEs and other actors to attend the summit.

Tanzania is seen as the region's food powerhouse, ready to boost exports while improving the lives of smallholder farmers, who make up the majority of the country's workforce.

Mr. Geoffrey Israel Kirenga, SAGCOT Chief Executive Officer, and Mr. Donald Mizambwa, AGRA Associate Programme Officer, both emphasised that Tanzania's agricultural investment prospects would be highlighted at the AGRF summit, which is scheduled to attract over 10,000 people from across the world.

"Our reputation as a major exporter of maize, rice, soya, and other agricultural products is gaining traction. What we need to do is boost production, offer value, and maintain a high level of consistency.

Nations sourcing agricultural commodities and goods from Tanzania will gain trust that we are long-term reliable, and that this is not a one-time event "Mr. Kirenga stated.

Tanzania's government will promote its major agriculture programmes as well as the resulting investment potential during the summit.

In a year-long deal room, Tanzanian SMEs will look for overseas partners to collaborate with in order to expand their trade. According to him, the country exports a lot of maize and rice.

Mr Mizambwa stated that agriculture in Tanzania is gaining shape thanks to a better business environment, which includes closer coordination of sector ministries - Agriculture Sector Lead Ministries (ASLMs) - under the Prime Minister's office. Tanzania, on the other hand, imports some sugar, wheat, and cooking oil, which the east African second-largest economy might generate if more effort was put in.