Tanzania's Taifa Gas to Set Up Plant in Kenya 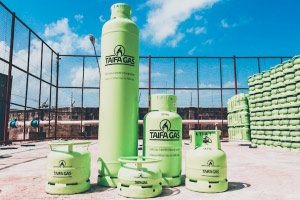 Tanzaniaâ€™s biggest gas dealer Taifa Gas has been licensed to set up gas plant and storage facilities at a site in Dongo Kundu near the port of Mombasa to supply LPG for domestic, commercial and industrial use.

The company, owned by Tanzanian business magnate Rostam Aziz, is expected to bring healthy competition in the gas industry in Kenya given its lower prices.

An impact assessment study report is expected this month, and the company has said in a notice that it intends to invite public comments on the construction of the plant.

"Taifa Investment SEZ Limited proposes to construct a liquefied petroleum gas plant, storage terminal and related facilities at Dongo Kundu in Mombasa County. The proposed plant is designed to store propane, butane and LPG mix of various grades for domestic, commercial and industrial use," reads part of the notice.

During recent bilateral trade negotiations between the 2 countries held in Zanzibar, Kenya pushed for local carrier JamboJet to be allowed to fly to several destinations in Tanzania.

Nairobi also wanted a waiver of fees charged on tourist vehicles into Tanzania from the Namanga border.

More than 5 companies have applied to construct gas facilities in Kenya.

Some of the companies which have applied for the license to tap in the submerged gas pipeline from new Kipevu Oil Terminal (KOT2) include Aevitas Investment, Mombasa Gas Terminal Limited (MGT), Lions Gate limited, Focus Container Freight Station and Mansa East Africa Limited.

Once licensed, they will cater for the untapped LPG market with the increasing population and demand in the country and in the East African region.

Kenya imports about 40% of gas annually from Tanzanian liquefied petroleum gas (LPG) firms via the Namanga and Holili border posts and the remainder is imported through the Port of Mombasa.

The LPG cost in Mombasa is much higher than in Dar es Salaam LPG because the offloading and storage infrastructure at Dar es Salaam or Tanga ports is more efficient.