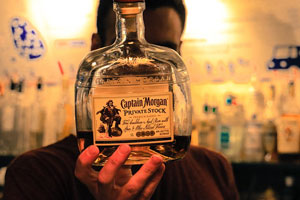 East African Breweries Limited (EABL) has begun brewing Captain Morgan Gold at its Ruaraka distillery in Nairobi as it looks to take advantage of the developing business sector of spirits consumers.

The local brewer, which has up until now been bringing in the rum produced by its parent firm Diageo, is presently creating the top notch spirit in the 250ml bottle at a prescribed retail cost of Sh270.
Fred Otieno, Kenya Breweries Limited head of development, says they will by June begin producing the 750ml bottle that will retail at Sh800, Sh400 less expensive than the foreign variant of the rum.
The local brewer has in the previous years seen sales of its beers, for example, Guinness, Pilsner and Tusker plunge while its spirits keep developing by double digits.
Mr Otieno told the Business Daily in a meeting, “The fact that it is locally produced, using local inputs, means that it will have a slightly different taste than the original."
"We are seeing a lot of our consumers shifting to mainstream and premium spirits brands. By locally producing a brand such as Captain Morgan, our customers get to enjoy a renowned drink at an accessible price.”
The formula used in the generation of the Captain Morgan variant will one year from now be utilized for local production in EABL's regional markets and ialso in Diageo's subdivisions in West Africa, Mr Otieno included.
The EABL has improved its innovation to help sales growth, enabling the launch of brands, for example, Kenya Cane Coconut and Tusker Cider.
Others like Kenya Cane Citrus and a Dublin-based brew called Hop House are in the pipeline.
The NSE-listed brewer recorded a 6% net profit increase to Sh8.5 billion in the year that ended in June, helped by cost-cutting and marginal sales growth.