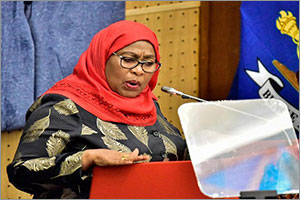 Once considered as the staunch anti-Covid country, Tanzania is gearing towards vaccination after a team of health experts handed in their report on how to roll out mass inoculation to President Samia Suluhu.

The report comes a month after a special committee of experts handed in another report evaluating the Covid-19 situation in the country.

The Tanzania daily The Citizen revealed that among other things, the team, chaired by Prof Said Aboud, recommended for the government to allow voluntary vaccination and resume issuing of statistics related to the pandemic.

The report also detailed how Tanzania can mobilize resources to control Covid-19 as well as the proposals for the vaccination strategy.

â€œThe committee has advised different ways of mobilizing financial resources from the budget and other stakeholders including the international organizations and the private sector,â€ said the State House in a statement signed by the Presidency spokesperson Gerson Msigwa.

â€œThe money will be used to finance medical equipment, training and the vaccines,â€ stated Mr. Msigwa. The handing of the report comes just a day after Zanzibar President Hussein Mwinyi told World Health Organisationâ€™s (WHO) representative to Tanzania Dr. Tigest Ketsela Mengestu that the archipelago was ready to receive the Covid-19 vaccination support and other donations to fight against the pandemic.

Former President John Magufuli, who died on March 18, had repeatedly played down the pandemic, relying on prayers and even herbal remedies to defeat the virus and declared vaccines were potentially "dangerous".

The country has not published statistics on the epidemic since April 2020: the latest figures reported 509 cases of contamination and 16 deaths.

Vice-President Samia Suluhu Hassan, who succeeded Magufuli, took the opposite view of his policy, believing that "it is not good to ignore it" (the Covid-19).

The former president declared that his country had "freed itself" from coronavirus through prayer. He had also mocked the reliability of the tests, claiming that a goat, quail and papaya had tested positive.

But after a wave of deaths in February attributed to "pneumonia", he admitted half-heartedly that the virus was still circulating.

President since 2015, Magufuli, nicknamed the "Bulldozer", died on March 18, after a mysterious three-week absence. It was later officially announced he died of heart complications.