Tanzania's trade to be boosted by AfCFTA agreement 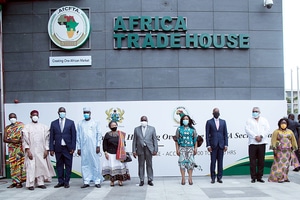 According to business analysts, it will act as a platform for increasing Tanzania's commerce with Africa, which is now at 15%.

"About 80% of our commerce is with nations outside Africa," said an Arusha-based economist who applauded the decision. The agreement, which was confirmed by the government last Thursday, would increase commerce by expanding export options.

"About 80% of our commerce is with nations outside Africa," said an Arusha-based economist who applauded the decision. The deal, which has been accepted by the government, would increase commerce by expanding export options.

AfCFTA would not only provide a larger market for the country's produce, but it would also open doors for the country's human capital owing to free movement of labor. EAC Secretary General Peter Mathuki praised Tanzania and Burundi's decision (ratified in June 2021), saying it will provide East Africans access to a wider continental market. He stated that AfCFTA will expand EAC exports to African nations outside the six-nation bloc while also increasing commerce with the rest of the globe.

"It will also enhance people's mobility across Africa, boost trade and development, and position the EA region to trade with the rest of the globe," he said.

Dr. Mathuki stated that Tanzania and Burundi ratifying the AfCFTA agreement will hasten its implementation.

He went on to say that the EU was virtually finished with its tariff proposals, as well as the timetables for liberalizing trade in services. He said that the regional organization anticipates that the deal would result in lower business expenses and more promotion of local content. According to the East African Business Council (EABC), the EAC's expected 3.6 percent growth this year would help accelerate AfCFTA implementation.

Mr John Bosco Kalisa, executive director of the Arusha-based regional business group, stated, "There is hope and optimism on trade and investment growth."

AfCFTA went into effect in January of this year, with a consumer market of 1.3 billion people as its objective.