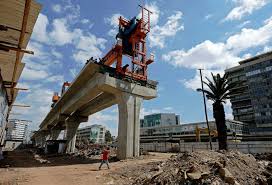 The transport sector is an important component of the economy and it plays a very significant role in supporting the intended development in the other sectors. This is very evident in a global economy where economic opportunities have been increasingly related to the mobility of people and goods.

A relation between the quantity and quality of transport infrastructure and the level of economic development is apparent. High density transport infrastructure and highly connected networks are commonly associated with_high levels of development in that many countries in the world actively engaged in physical infrastructures such as utilities, transport, telecommunications and others.
This is true for Ethiopia in that the country heavily invested to expand and modernize its road, railway and air connectivity. As a result, the nation has allocated annual budget with 55.4 billion Birr for the sector.
Presenting his ministry's nine-month performance report to the House of Peoples' Representatives recently, Ethiopia's Transport Minister Ahmed Shide said that the country is currently executing the construction and maintenance of 216 new and existing road projects with the sum total budget of 46.2 billion Birr. He added that the ministry spent 15.5 billion Birr for the aforementioned projects in the reported period.
According to the minister, due attention has been given to enhance local contractors' capacity in road construction sector; the ministry awarded 78 projects to Ethiopian companies that demonstrated better performances in completing projects before their foreign counterparts did.
It was indicated that the stated road projects created 58,673 job opportunities for the youth, among them 9,777 were females.
Besides easing traffic congestion and enhancing connectivity, the Addis -Adama Expressway has been generating further income for the country and 539,000 Birr was collected from 4,909,849 vehicles in the past nine months. Ahmed said that this year's performance has been increased by 24.25 percent from that of last year.
"Success was also gained to reach the country's total number of vehicles to 780,000," said Ahmed, adding, "69,932 vehicles imported to the country during the past nine months." The import would in turn increase the 5.9/1000 person-vehicle ratio in 2015/2016 to 8/1000 in 2016/ 2017.
While the number of passengers traveled by medium and large size buses increased from 301.8 million in 2015/16 to 491.9 million in 2016/2017, the number of public transport buses in Addis Ababa has also been increased from 1,259 to 1,407 in the stated period.
The Addis Ababa Public Transport Enterprise secured 359.5 million Birr in the reported time.
In the maritime and logistic sector, Ethiopia has gone a long way to enhance the accessibility and safety of maritime transport and logistic infrastructure as well as to reduce the huge cost the country has incurred for port rent.
Extensive activities are also underway to build and expand dry ports across the country that would significantly reduce the number of days' containers stay in port and ease the huge congestion currently witnessed in the Port of Djibouti.
Minister Ahmed indicated that activities underway to build Mojo Dry Port in the money secured from World Bank. Upon completion, the dry port believed to enable the country to be a logistic hub.
Besides, 365 maritime personnel were trained during the past nine months that would help the country to provide a reliable maritime transport and logistic service.
Concerning the aviation industry, Ahmed said that the ministry enormously engaged to keep the leading position Ethiopian Airlines, formerly Ethiopian Air Lines and often referred to as simply Ethiopian, established in the African aviation industry in terms of increasing its passenger and freight carrying capacity and ensuring flight safety.
Plus, the purchase of eight passenger and five training aircrafts was also concluded in the reported period. Currently, Ethiopian is expanding its aircraft number to 86 and destinations to 98.
In line with enhancing the airliner's human resource development, 753 personnel were trained in maintenance, flight attendant and other fields. While Ethiopian transported 5.5 million international passengers during the past nine months, the number has surpassed by 13 percent last year in same period.
"Besides, the expansion of Bole International Airport and the construction of various airports across the country is well underway," Ahmed said.
While the expansion of the Airport reached 51.28 percent, the construction of Jinka and Hawassa airports fully completed during the past nine months.
The House appreciated efforts the Ministry has made to engage more local contractors in the road construction projects.
Presenting the recommendation, Chairperson of the House Transport Affairs Standing Committee Kamil Ahmed said that the ministry's decision toward projects to local contractors is in line with government's strategy to enhance their competitiveness in international level.
"Ethiopian contractors have also shown better performances in those projects than that of foreign companies could do," Kamil further stated.
The committee also praised the ministry's engagement to maintain the leadership position Ethiopian Airlines has in Africa's aviation industry.
Having the stated facts in mind, it is believed that the ministry has to make a rigorous follow-up mechanism for projects completed within contractual period while keeping their maximum quality standards so as to materialize the country's vision of having a transport sector that fuels its economic growth.