Kenya's Food Security will be improved with new Solar Technology 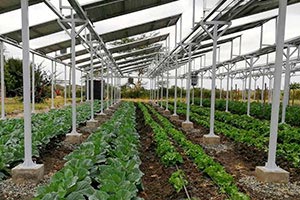 Solar panels have been used to introduce a new technique aimed at increasing crop yield in Kenya.

After a year-long study partnership between the University of Sheffield, World Agroforestry, and Latia Agri-business Center, the agrivoltaics technology, which involves capturing energy from the sun twice through the use of solar panels, was inaugurated at Isinya, Kajiado County.

Solar panels are mounted three metres above the ground, leaving enough room for crops to grow underneath.

As a result, only a tiny amount of the land is used to generate electricity, leaving the balance available for food production.

Agrivoltaic energy systems integrate the delivery of solar electricity, crop production, and rainwater gathering on the same land area, according to Dr Richard Randle Boggis, a researcher at the University of Sheffield.

It makes the most efficient use of solar energy and land to generate electricity while also increasing agricultural yields and thereby increasing food security.

While using solar to generate inexpensive energy isn't a novel concept, growing vegetables beneath the panels is.

"Rather than being mounted near to the ground like standard solar power arrays, the solar panels are built several metres above the ground, with gaps between the arrays allowing crops to be grown beneath." Rainwater is also collected from the panels and used during droughts," he explained.

According to Boggis, the invention represents a triple win for food, energy, and water security in Africa, as it is the first of its type.

He went on to say that the project will assist guide people through the potential of agrivoltaics in Africa, as well as provide an alternative to greenhouse adoption in locations where it was difficult.

Climate change, according to Dr. Christine Lamanna, a climate change ecologist at World Agroforestry, is a serious challenge in agricultural output in Kenya.

According to Lamanna, irregular rainfall patterns and excessive heat have an impact on food production, whereas growing crops in the shade can enhance yields by retaining moisture and reducing heat stress on the crops.

Apart from assuring food security, the agrivoltaics project, according to Charles Macharia, a manager at Latia Agri-business Solutions, maximises land utilisation and minimises electricity and water expenses for farmers.

"As the panels have gutters, rain water is collected and stored in tanks, and the solar panels also supply energy, power and water bills are reduced." Because the crops are planted beneath the solar panels, no land is wasted," Macharia explained.

Rainwater is collected and utilised to irrigate crops.

The experimental project also allowed Macharia to compare how different crops thrive under the solar panel shades, with certain crops performing better than others.

Some crops, like as cabbages, kale, eggplants, and maize, fared exceptionally well under the solar panel shades, according to Judy Wairimu, an agronomist with Latia Agri-business Solutions.

"Cabbages cultivated beneath solar panels did exceptionally well, with each cabbage weighing up to 5 kilos compared to 2 kilogrammes for those grown in the open field." Maize also performed well because it was taller, bigger, and had double cobs, according to the agronomist.

Growing crops under the solar panel shade protects the plants from damage caused by high temperatures and ultraviolet light from the sun, resulting in a higher yield, according to Wairimu.