Exploration a priority for building Kenyan mining sector, the results are rewarding 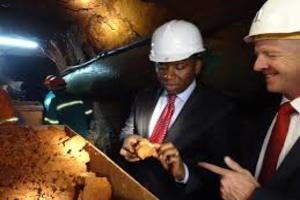 World Bank ranked Kenya  among the top 3 most improved economy in terms of ease of doing business in 2016, however in the same year according  to Fraser Institute global survey report the country also improved 16 places in terms of being a global mining destination

“Kenya is the gateway connecting east and central Africa, we offer cost effective and reliable power, world-class infrastructure (railways, highways, airports and sea ports) and a skilled and affordable labour force,” Dr. Ibrahim Mohamed stated. “Our currency is stable, we have strong democratic and independent institutions which guarantees adherence to rules of law and we strictly follow international treaty requirements.”
The first critical step to building a mining industry is exploration and Kenya is heavily invested in this specific area. It hopes to conclude a national airborne geophysical survey by the end of 2017 which will provide clarity and guidance for explorers and will further reduce exploration costs for potential investors.
With the implementation of the 2016 Mining Act mineral concession applications can be done online, with a guaranteed response from the newly established Minerals Board within 90 days. “Recent discoveries by both the government and private sector explorers have also pointed to high prospects of gold, titanium and manganese amongst others in the country,” Dr. Mohamed continues, outlining specific key minerals the country is hoping to capitalize on which include:
• coal
• iron ore
• copper
• titanium
• niobium
• rare earth metals
According to the principal secretary, western Kenya is also known to host reliable gold deposits. “96% of the country’s gold belt is under-explored and offers extensive opportunities.” Acacia Mining is currently conducting gold exploration work in the country and has reported promising results.
The priority at the moment is the conclusion of the airborne geophysical survey which will provide increased availability of geological data, accessible to anyone applying for a mining licence and will help de-risk mining investments.
With the mining sector on the rise, it is one of the major steps being taken by government to incentivize exploration and in turn mining in the country.