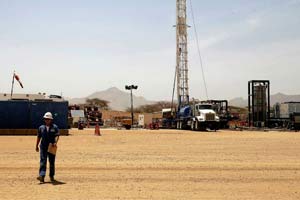 The Anglo-Irish operator, along with its partners Total and Africa Crude, is revisiting the original South Lokichar exploration scheme to minimise costs and intends to send a fresh development plan to the Government of Kenya by the end of next year.

Explaining Tullow's current thinking on the integration of renewable energy into the multi-field project and limiting greenhouse gas emissions, the company's spokesperson said that a large amount of energy would be required to meet the heating requirements of South Lokichar's waxy crude as well as processing requirements.

The Tullow spokesperson said that these needs could be met by the associated gas that will be generated at Lokichar along with oil and also by plugging into Kenya's electrical grid.

"Reducing (greenhouse) emissions is an important part of the design and for example, using generated gas to generate energy would reduce emissions," he said.

"This along with the use of Kenya's grid power as a back-up supply, including wind and geothermal power, offers the best combination of resource management and the deployment of available power.

"The goal is to obtain power from the Kenya grid, which has a combination of energy sources, including geothermal and wind power," said the spokesperson.

"This is very symbiotic, since the initial process of production would be powered by the gas generated, which is used to convert to fuel. Any backup/standby (needs) is given from the grid."