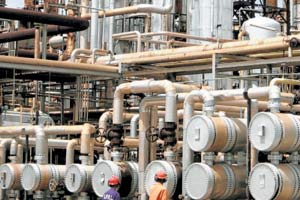 Eni and Kenya have held discussions on several potential green plans in the East African country, including the conversion of the Mombasa refinery.

The two sides discussed a multi-year plan for the collection of waste and agricultural holdings, which the statement described as ideal for biofuel plants. Production from these residues could include biodiesel, bio-jet and bio-ethanol, Eni said, in line with its "circular economy" technology.

The plan would involve a study on the conversion of the Mombasa plant to a bio-refinery. Eni said that the plan would see Kenya play a leading role in Africa's decarbonization plans.

The refinery was closed in 2013. Tullow Oil stored crude oil from its South Lokichar area in the Early Oil Pilot Scheme (EOPS) plant, which stopped in July.

The Italian company cited the conversion of refineries to bio-refineries as an example of its circular economy. Eni converted the Venice refinery in 2014, with plans to expand the production of biodiesel from 2024 onwards. A second bio-refinery was opened, also in Italy at Gela, in August 2019.

Eni also said that it had signed amendments to three production-sharing contracts (PSCs) offshore Mombasa. Eni Kenya is home to six offshore blocks in the country.

The Italian company signed an agreement with Qatar Petroleum (QP) in July 2019. The Qatari company acquired 13.75 per cent of the shares in L-11A, L-11B and L-12. The agreement was subject to the approval of the Kenyan authorities.

QP struck a matching handle with Total, giving the Qatari NOC a total of 25% in each of the three blocks.