Kenya Plans to Spend $4.5 Billion in the Commercialization of Crude Oil 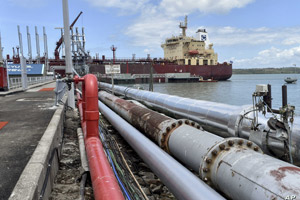 According to H.E. John Munyes, Cabinet Secretary for the Ministry of Petroleum and Mining, Kenya is seeking KSh500 billion ($4.55 billion) in investment to construct a pipeline, central processing and storage facilities from Lokichar to the coast, as well as upgrade refineries in Lamu and Mombasa.

The emerging oil producer currently transports its crude from Turkana to the coast, preventing commercialization and, as a result, economic development.

â€œWe put our oil on the market and found it to be successful. However, Kenya has a problem: â€œOur flow and average flow are so poor that we are unable to commercialise our crude oil with our current [infrastructure] capabilities,â€ Munyes explained. â€œWe should upgrade Mombasa's refinery, which is currently used to store our crude oil... We're still thinking of putting up a model refinery in Lokichar.â€

After discovering oil in Blocks 10BB and 13T in Turkana in 2012, the East African country has been hailed as the region's next major oil producer; however, due to a lack of investment, it has been unable to achieve large-scale commercialization.

The Kenyan government, according to the Cabinet Secretary, is actively seeking to engage with private investors to finance infrastructure growth, with several companies expressing interest so far.