Kipevu Oil Terminal Project Timeline and all You Need to Know 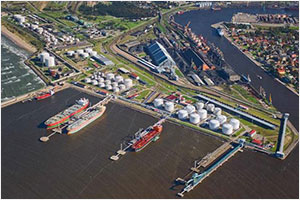 Upon completion the new upgraded modern oil terminal is designed to accommodate a capacity of four vessels of up to 200,000 Deadweight tonnage (DWT) replacing the current 50-year-old terminal that currently sits there. The scheme is being developed at a cost of $385m from KPA, built by the China Communications Construction Company. It will have both land and subsea pipelines connecting it to the storage facilities in Kipevu with a capacity to steer five different fuel products. The products comprise of heavy fuel oil, three white oil products (DPK-aviation fuel, AGO-Diesel and PMS-Petrol) and crude oil.

The Sh40 billion Kipevu Oil Terminal (KOT) at the Port of Mombasa began in February following the award of the contract to China Communications Construction Company. Kenya Ports Authority (KPA) acting managing director Daniel Manduku stated that contract was awarded after completion of due diligence by the tender committee weeks earlier. The modern terminal will have the capacity to handle four vessels and will have a Liquefied Petroleum Gas (LPG) line that is set to stabilise gas supply nationwide.

Around forty percent work had been completed on the Oil Terminal just 11 months after commencement. The scheme will entails USD 385 million investment. China Communications Construction Company (CCCC) had planned the project construction to last for 30 months, completing 1 August 2021 but was pushed further after the COVID-19 struck. The current 50 year old Kipevu Oil Terminal will be shifted to a new area portâ€™s southern part (near Dongo Kundu), opposite side of the current container terminal.

The Kenya Ports Authority revealed that construction of the new Kipevu Oil Terminal in Kenya was 63.2% complet. The managing director, engineer Rashid Salim added that works which began in February 2019 were slightly slowed down by corona virus: â€œWe got some delays, however we are now back on track and we are aiming to complete the construction works within the set period.

Dredging works was completed and Marine pilling started. Marine pilling is the task of creating deep foundations down in the ground below sea level giving support to structures and buildings that are offshore.

The new Sh40 billion Kipevu Oil Terminal at the Port of Mombasa was at 84 percent completion stage. From September to April this year, the scheme, which is fully funded by the KPA, had gone up by 20.7 percent. The Kipevu Oil Terminal will be supplementing the two facilities at Shimanzi and the current Kipevu terminal.

The new Kipevu Oil Terminal is at 93.5 percent complete and will be capable of handling four vessels at once.

By the end of November, the project was reportedly 96% complete and expected to be subjected to a dry run test in December 2021. This was revealed by the Kenya Ports Authority, the company set to take over the terminal from China Communications Construction Company (CCCC), the executor, and run it before handing it over to Kenya Pipeline Company (KPC).

President Uhuru Kenyatta on 6th January led Kenya in making another blue economy stride by inspecting and testing of the Sh50 billion Kipevu oil terminal. The new four berths, whose total length is 770m will be receiving Jet fuel, Petroleum, Diesel and LPG in one interval increasing the efficiency of the terminal which serves Kenya, Rwanda and Uganda. The oil terminal also has a work boat wharf for landing facilities at Westmont area. The terminal will be handling 20 times more vessels than the previous Terminal.