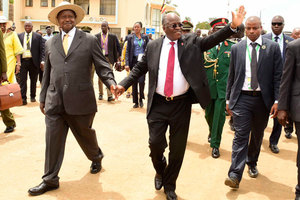 John Magufuli wants investors, the governments of Uganda and Tanzania to accelerate the construction of the East African Crude Oil Pipeline (EACOP). Magufuli wants the pipeline to be constructed in the shortest time possible instead of waiting until 2020.

After completion of key infrastructures like the pipeline and the refinery, Uganda expects to start oil production. However, Magufuli believes that it can be done sooner.
"Let us move forward. Why should we wait until 2020? The investors are here, we have the money, and we have the experts. Investors know in case we start now, they will get the results immediately, so, why should we wait for results until 2020. We need this project now," he said emphatically.
Construction of 1,445 km crude oil pipeline is scheduled to be completed by 2020. The pipeline project, initiated by Total E & P, one of the joint venture oil partners is expected to cost $3.55 billion. Magufuli who is on a three-state visit to Uganda was speaking at Mutukula in Kyotera district, after laying a cross-border mark-stone for the East African Crude Oil Pipeline (EACOP).
At the same function, the two Presidents also recognized a team of scientists that spearheaded exploration activities leading to the discovery of oil and gas resources. Uganda's Minister of Energy and Mineral Development Irene Muloni said EACOP will support economic growth in the region.
"As a government, we encourage investors to continue supporting national content in the region which is a key factor in our socioeconomic development. We shall put in place the necessary policies, laws, and regulations to ensure that our people are trained, acquire employment and entrepreneurship are boosted," Eng Muloni said.
The government of Uganda will participate in the East African Crude Oil Pipeline (EACOP) project through Uganda National Oil Company (UNOC). "Not only will the project spur infrastructure development for both countries including road network at a port at Tanga, it will also facilitate and boost trade in the region," Muloni added.
She said that constructing the pipeline from Kabaale to Tanga is premised on being the least cost, least risky route. The 1,445-kilometer heated pipeline is poised to become the longest heated crude oil pipeline in the world. It will provide access to Uganda's crude oil to the international market. In August this year, the two leaders laid the first foundation stone in Tanga for the East African Crude Oil Pipeline.