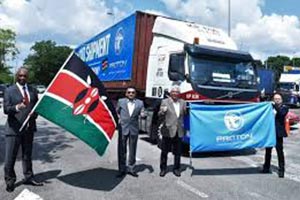 In a welcome boost to Kenyaâ€™s industrialization and job formation pillar under the â€œBig Fourâ€ agenda, the carmaker released shipments totaling 30 units of CKD (Completely Knocked Down) kits.

The vehicles will be massed by Simba Corporation (SimbaCorp), a diversified Kenyan conglomerate with a long history in the car sales and assembly industry.

The consignment was flagged off by Kenyaâ€™s High Commissioner to Malaysia, Francis Ndegwa Muhoro, who continued the importance of Kenyaâ€™s international economic diplomacy agenda while encouraging further Malaysian investment in the country.

In his address, he noted that â€œMalaysia and Kenya share many similarities, from a colonial past to our efforts in developing our nations.  Protonâ€™s entry into the country is not just as an entry into a market of 51 million people but a gateway to a potential African market of up to 1.3 billion peopleâ€.

The envoy further pointed to Kenyaâ€™s potential as an East African automotive hub underpinned by a sizeable middle class, progressive business environment, regional market access and history of automotive assembly, while looking forward to more trade between the two nations.

In his remarks, Proton Deputy CEO Datuk Radzaif Mohamed noted that â€œwhile strengthening Protonâ€™s domestic position is critical to be truly acknowledged as an international carmaker, we also need to see our products in places as diverse as Bangkok, Islamabad, Cairo and now, Nairobiâ€.

Mohamed observed that local assembly would attract lower taxes and develop Kenyaâ€™s automotive manufacturing industry, the decision to export the Saga in a CKD format followed close consultation with SimbaCorp, its Kenyan partner.

â€œOn a national level, this will also increase the value of trade between Malaysia and Kenya and help to contribute to the creation of jobs in Kenyaâ€™s automotive industry,â€ he added.

â€œSagaâ€ is an acronym for â€œSafety, Achievement, Greatness and Abilityâ€.

The Proton Saga was first conceptualized as Malaysiaâ€™s â€œnational carâ€ in 1979, and is today viewed as a â€œnational symbolâ€.

Of the companyâ€™s different automobile models, it is Protonâ€™s longest-running and best-selling nameplate.