Proton Dispatched Its First Batch of Proton Saga to Kenya 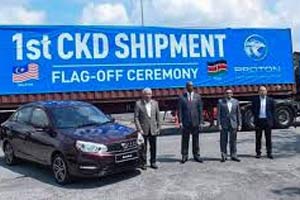 PROTON Holdings Bhd steps into Kenyan market by sending the first batch of cars to the republic.

The cars, totalling 30 units of Proton Saga, were shipped as completely knocked down (CKD) kits and will be assembled by Simba Corp, a diversified conglomerate with a long history of sales and assembly experience in the automotive industry.

Proton deputy CEO Datuk Radzaif Mohamed said â€œWhile strengthening Protonâ€™s domestic position is critical to be truly acknowledged as an international carmaker, we need to see our products in places as diverse as Bangkok, Islamabad, Cairo and now, Nairobi,â€

â€œOn a national level, this will also increase the value of trade between Malaysia and Kenya and help to contribute to the creation of jobs in Kenyaâ€™s automotive industry,â€ he added.

Protonâ€™s decision to export the Proton Saga in a CKD format was made following close consultation with its Kenyan partner, Simba.

â€œMalaysia and Kenya share many similarities, from a colonial past to our efforts in developing our nations.

â€œProtonâ€™s entry into the country is not just as an entry into a market of 51 million people but it is also a gateway to a potential market of 1.3 billion inhabiting the African continent,â€ he said.

Proton said Malaysian car sales continued to revive in July as a combination of tax-free incentives and consumer demand pushed the total industry volume to a 13-month high.

Proton Edar Sdn Bhd CEO Roslan Abdullah said there has been a positive effect on other areas of the business because of the encouraging sales.

â€œFor instance, Proton Commerce, our in-house vehicle financing provider, saw a 100% increase in the number of loans disbursed compared to that of the previous month.

â€œFor August, Proton looks to continue to expand the market and stimulate sales in preparation for more model introductions later in the year,â€ he said.