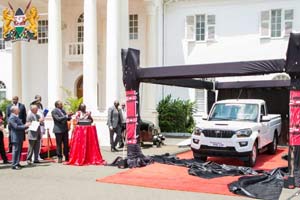 Mahindra's entry follows that of French carmaker Peugeot SA and Germany's Volkswagen AG, both of which announced resumption of local assembly in 2017 and 2016 respectively, after decades-long absences.

The interest in the local new vehicle market by international firms, which also involves Swedish truck maker Volvo AB , comes in the wake of government efforts to attract investment in the sector to create jobs, by offering a range of incentives such as tax breaks.

Nairobi is also planning to limit the age of second hand vehicles that can be imported into the market as part of the drive to boost investment in local assembly of new vehicles.

Used car imports from countries such as Japan make up 85% of annual car sales in Kenya, while the rest are locally assembled or brand new imports that have already been assembled.

Mahindra has begun to assemble its Scorpio Single and double cabin small trucks at a plant in the coastal city of Mombasa. The plant is owned by its local partner, car retailer Simba Corporation, Mahindra said in a statement.

Mahindra plans to use Kenya as a gateway into the wider African market as it looks to grow its share of the commercial and passenger vehicle categories, it said.

Kenya's President Uhuru Kenyatta has asked government officials and local lenders to discuss how they can offer affordable auto loans to consumers in order to further strengthen demand for new vehicles, his office said in a statement.