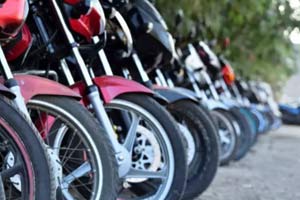 The African two-wheeler market is projected to grow at a CAGR of 12% by 2025, on the back of an inadequate public transport system, growing urbanisation and increasing imports of two-wheelers across the region.

In addition, the increasing penetration of Chinese and Indian low-cost two-wheelers in the African two-wheeler market by two-wheeler importers gives customers more options, which are expected to have a positive impact on the market during the forecast period.

The Motorcycle segment was the largest segment by volume in 2019 and is expected to dominate the market during the forecast period due to its increased fuel carrying capacity and improved manoeuvrability in tough road conditions across the region.

In addition, increasing consumer preference for daily travel, improved off-road performance, and the ability to avoid traffic congestion, etc., are fueling demand for motorcycles in the African two-wheeler market. Based on engine capacity, the market can be segmented up to 125cc, 126cc-250cc and 251cc-500cc and over 500cc.

In terms of regional analysis, the markets in Egypt, Nigeria, Kenya, Morocco, Uganda, Ethiopia, Algeria, Tanzania, South Africa and Angola have been segmented.Although the demand for two-wheelers in Egypt is expected to decline by around 30% due to the outbreak of the COVID-19 pandemic, it is expected that the country will continue to account for the largest share of the African two-wheeler market, mainly due to lack of public transport, increasing numbers of female riders as well as easy financing options and growing per capita income.

Nigeria accounted for the second-largest share of the African two-wheeler market in 2019 due to a lack of public intra-city transport, increased economic activity and increased demand for last-mile delivery.

Key players operating in the market are investing in innovations to make a sound return on investment. In addition, strategic moves, such as mergers and collaborations, also help key players increase their customer base and expand their sales and distribution networks in the African Two-Wheeler Market.