Proton Exports Hit 669 Units in May 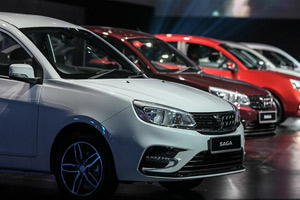 Steven Xu, Proton's worldwide sales director, stated at the start of the year that the company's objective for 2021 was to rapidly increase Proton's export sales volume.

â€œDespite international restrictions and the rising cost of shipping caused by the coronavirus, we were confident of being able to meet our goals due to the sales plans of our importers and the appeal of our products.

â€œAfter five months, however, we are close to doubling the volume target set, which hopefully is a sign for more success in 2021,â€ he said in a statement yesterday.

Following the start of local assembly for the Proton Saga in Kenya, Pakistan is the next market to get Proton automobiles built domestically.

Xu said its Pakistani partner, Al-Haj Automotive Pte Ltd, will start assembling the Proton Saga at its new plant in Karachi by the end of July or early August.

â€œThe Proton X70 will be added to their production line later, and we have high hopes this development will spur sales growth in the South Asian region.â€

Growing demand in numerous key areas, such as Pakistan, which is a new market but has been the best performer for the first five months of 2021, has been credited with driving the increase in export sales.Brunei was also the third-biggest export market by volume this year and in May, in which its importers had the best sales month in the companyâ€™s history.

The importer and distributor in Egypt had also received 350 units this year, making it the second-largest export market for the national automotive company.

Up to the end of May, the total year-to-date volume was at 174% of the target set and only 6% behind what was achieved for the entirety of 2020.

The company noted that the growing sales in export markets is a reassuring sign of wider acceptance of the brand and products which is the key to achieving its long-term goals in the region.

Proton's presence in Asean is now restricted to Brunei, but the business intends to return to the region's two largest markets, Thailand and Indonesia, in the near future.

According to Xu, Proton requires a strong presence in Thailand and Indonesia to be the third best-selling brand in Asean.

â€œAs the biggest automotive markets in the region, they offer enormous volume potential, but the level of competition is also very high.

â€œFor both countries, we have been busy recruiting partners to build a network that ensures a viable business model and in the short term, our target is to return to Thailand in 2022.â€