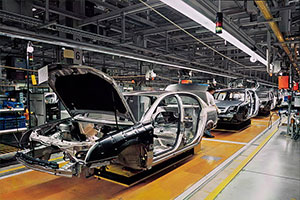 The global trade dynamics are shifting as a result of a variety of short-term and long-term variables. The rising viability of new Arctic marine routes, the growth of new states into automotive manufacturing centres, changes in geopolitical equations, supply chain resilience, and shifting talent pools are just a few of the global variables that might influence future supply chain hubs.

Some of the world's largest automakers, including Renault-Nissan, Ford, Peugeot, and Hyundai Motors, are already present in Morocco. The creation of such new production centres has the potential to alter the European automobile market's supply chain dynamics.

Recent trends indicate a return of foreign interest in the African market, which has one of the world's fastest-growing populations, with the United Nations estimating Africa's population to be 1.374 billion by 2021.

While motorisation rates on the continent remain relatively low, despite increasing, Africa might offer a survival haven for the traditional aftermarket industry. As the industry is under pressure in many areas of the world owing to peaking vehicle fleets and technological disruptions, Africa is one of the few regions where the â€˜traditional' automotive aftermarket has potential to develop.

This makes Kenya an intriguing regional centre for the aftermarket, with Dubai-based trade businesses cited as significant suppliers, making the emirate Kenya's second most important parts supplier behind China. Nigeria, which lacks a domestic manufacturing industry, is heavily reliant on imports, with many resorting to Middle Eastern suppliers, prompting both nations to build e-commerce skills.