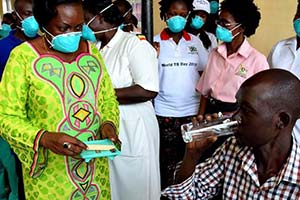 The Global Fund agency helps Kenya fight HIV/Aids, tuberculosis and malaria has given the country Sh42 billion to be used up to 2024.

The organization's suggestions to Kenya on how to improve the programs are supported by experts.

Global Fund wants Kenya to step up activities for preventing HIV, TB, and malaria, strengthen health and community systems and ensure extra efforts are put in place to take care of vulnerable people.

It also wants Kenya to tackle gender inequalities and barriers to healthcare.

The increase followed intense lobbying at the agency's fundraising meeting in France in October last year.

Kenya is expected to identify programs to be sponsored after seeking public opinion.

Mr. Eldon-Edington said apart from the Sh42 billion, Kenya qualifies for extra money to set up schemes that address the vulnerability of teenagers and young women to HIV/Aids and TB.

Many Kenyan HIV researchers agree with the Fund's recommendations. The scientists say the country's energy and efforts should go towards preventing new HIV cases.

He urged the ministry to focus on pediatric HIV, which has been largely neglected. Some 53,236 women with HIV received ARV prophylaxis to prevent transmission to their newborns in 2017, NACC says. The figure represents 77 percent of those in need.