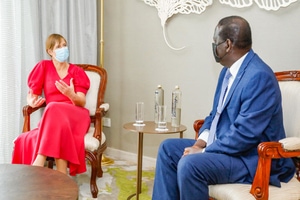 President Uhuru Kenyatta met with his Estonian counterpart Kersti Kaljulaid, who was in town. Kaljulaid was in Kenya for a three-day official visit.

During the conversation, the two heads of state saw the signing of a bilateral framework of cooperation on Political Consultations, Health, and an environmental letter of intent.

"Several issues of common importance to Kenya and Estonia were also discussed," according to State House spokeswoman Kanze Dena.

The two heads of state expressed pleasure with the current bilateral cooperation in numerous sectors, notably ICT and innovation, where Estonia is widely regarded as a worldwide pacesetter.

The two Heads of State reaffirmed their commitment to continuing to expand bilateral cooperation in different sectors such as trade and investment, digital transformation, and economic growth in order to generate jobs for Kenyan youths.

The two heads of state highlighted the urgent need to confront climate change and its environmental consequences, as well as the need to boost global efforts in this area.

She complimented Kenya's commitment to regional peace and security, as well as to fostering African integration and economic growth.

Uhuru congratulated Kaljulaid on her appointment as the UN Global Advocate for Every Woman and Every Child and thanked her for choosing Kenya for her first visit to the continent.

"The worldwide devastation created by COVID-19 necessitates quick and effective action by the international community as a whole to remedy it," Kanze added.

The two Presidents agreed on the need of widespread access to Covid-19 vaccinations and asked the international community to boost vaccine sharing to guarantee universal immunization.