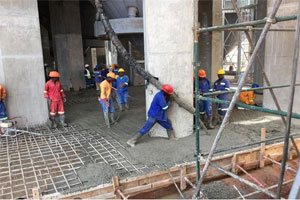 Dodoma stadium is set to become Africa's largest stadium. Harrison Mwakyembe Minister of Tanzania for Culture, Arts, Sports and Information has disclosed that the countryâ€™s proposed Dodoma Stadium project will start the construction procedure soon. The project has been on the track since 2017 after Morocco's King Mohammed VI promised to build the largest stadium in the East African country during his 2016 visit. Mr. Harrison Mwakyembe's announcement was prompted by Special Seats MP Felister Bura (CCM) who was interested to understand the timeline for the kick off of construction work at the sports venue.

As explained by Mr. Mwakyembe, Dodoma city is prone to earthquakes, and so his ministry had to repeat the huge task of  conducting the studies on seismic, topographic and feasibility so as to maintain accuracy, maximum safety of the structure and the spectators.

Mwakyembe said he has submitted all the essential surveys and report to President John Magufuli personally, in detail information about the location and characteristics of geological structures beneath the Earthâ€™s surface, where the layout will be set up. With that, the state is expected to move into the construction process. Mr. Harrison Mwakyembe also stated that the national government has already acquired land for the Dodoma Stadium project, which is even more than the initial hectors expected.

Poised to become Africa's largest stadium, upon construction, the planned mega stadium would be able to hold between 85,000 and 100,000 people, more than any other stadium on the continent.

The construction of the new stadium would place Tanzania in a stronger position to host major continental competitions like the African Cup of Nations (AFCON), the African Canadian Soccer & Cultural Association (ACSCA), as well as other top athletics competitions like All African Games and World Athletics Championships.