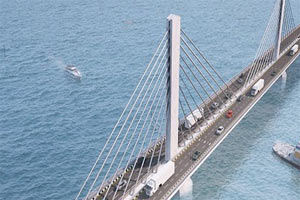 Selander Bridge construction in Tanzania is on track to the finish line. The ongoing construction of the USD 112.8 Million Selander Bridge project in Dar es Salaam, Tanzania is already complete by over 40%. This has been revealed by Chief Executive Eng. of Tanzania National Roads Agency (TANROADS). By Eng. Patrick Mfugale. The country's Minister of Works, Transport, and Communication Isack Kamwelwe visited the site for inspection of the work.

Established back in 1929, the old Selander Bridge is named after John Einar Selander, the first director of public works for Tanganyika.

In the view of Eng. Mfugale, the project that broke ground in 2018, would be much further ahead in timeline to completion if it were not for some unforeseen circumstances such as the existence of underwater cavities that have been resolved so far and the completion of all underwater construction.

A noteworthy concern is the outbreak of the Covid-19 pandemic, which has led to delay in flights in some of the countries from which experts and materials were imported for the project and, therefore, The timeline for the construction works has been revised. Despite the unforeseen challenges, the CEO has convinced the minister that by June, next year, four months before the official completion date, the bridge will be ready for operations because the remaining work is not as difficult as the completed one, and the suspension of flights in foreign countries be lifted shortly.

The new bridge is jointly funded by the South Korean government at 82.9 percent of the overall cost, as well as the Republic of Tanzania government. It connects road that links Aga Khan Hospital and Coco Beach and measures around 6.23 km. The bridge is predicted to ferry 55,000 vehicles to their locations every day with a 180-tonnage capacity, and this is expected to strongly reduce congestion along Selander Bridge's overloaded independence-time.