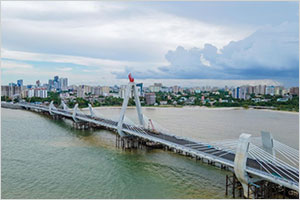 Construction of the new Tanzanite Bridge in Dar es Salaam is complete, on the stroke of midnight on February 1, operations of the new bridge kicked off allowing motorists access they have been waiting for.

The New Selander Bridge has combined the characteristics of a girder bridge and a cable-stayed bridge to make it lighter.

The technique enhances construction and economic feasibility, according to the builder.

Works minister Mbarawa had on Sunday January gave the update during an inspection tour of the project which is has cost Sh243 billion.

The minister further said no tolls will be imposed for using the bridge which is open to all motorists.

The Tanzanite Bridge was built by South Korea's GS engineering along the Coco Beach coastline in Oysterbay stretching all the way to Aga Khan Hospital.