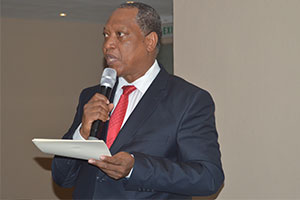 In the African Investment Forum, Tanzania has presented a 938bn/- pharmaceutical project before prospective investors.

Dr. Philip Mpango, the finance and planning minister led a government delegation to the conference met prospective investors, included OPEC Fund for International Development (OFID) and Korean Kolon Corporation for detailed deliberations on the first day of the forum.

According to the project description, the government wants to establish a general pharmaceutical plant under a Public-Private Partnership under Build Own Operate and Transfer (BOOT) arrangement.

The construction of the plant will be done in Kibaha. Also, the Medical Stores Department to produce drugs and other medical equipment for domestic as well as the East African Community and SADC markets.

Tanzania is regarded as one of the large pharmaceutical markets in Sub-Saharan Africa in terms of value that reached 496 million US dollars in 2017 and growing at 8.3 percent to 538 million dollars last year, according to industry sources.

Dr. Mpango stated that the investors they met were curious for important details about the proposed project that would prove whether it was feasible and economically viable.

He also mentioned that "the most important thing they said, the project was good and it aligned with sustainable development goals on health. They said they could see the good prospects of the project."

The pharmaceutical plant would also create more jobs and trade opportunities and solve the problem of fake medicines as it would be easier to monitor the quality standard, he said.

There are more eleven projects by the government to be unveiled to the prospective investors organized by the African Development Bank and partners Sandton Convention Centre.

However, it was only the general pharmaceutical plant project had reached the stage for the boardroom session for presentation to prospective investors, the minister said.

Around 2,000 delegates attended the forum that brought together heads of state, project sponsors, pension funds, sovereign wealth funds, institutional investors in 60 boardroom sessions to move projects from commitment to action.

One year down the road, the verdict is undisputed. Africa's investment opportunities are proving to be seriously attractive."

Close to 40 million US dollars' worth of investment deals were signed and financially closed in an inaugural event here last year.

AfDB expects 59 projects valued at 67 billion dollars will be discussed with deal-makers at the forum, branded as an exclusive platform for investments in Africa.