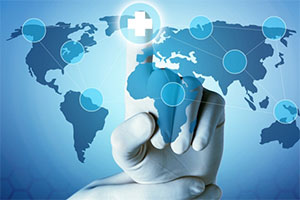 President John Magufuli admires gift presented to him by the Medical Association of Tanzania (MAT) during his meeting with doctors and other medical practitioners in Dar es Salaam.

He said that the government is investing heavily in modern health equipment and services to save foreign exchange earnings and promote medical tourism.

He added that since the government launched kidney transplants at Muhumbili National Hospital as well as modern diagnosis apparatus at Ocean Road Cancer Institute and Bugando Medical Centre, foreign nationals from across the East and Central African regions have been flocking to Tanzania for treatment.

He also added, â€œIf you look at countries such as India and China, they earn a lot of money through medical tourism, and that is where I want Tanzania to head."

With state-of-the-art health facilities at Tanzaniaâ€™s hospitals, President Magufuli said the number of patients who go abroad to seek medical attention has dropped sharply in the last four years.

President Magufuli said research shows that between $15.5 billion and $72 billion is spent annually in medical tourism.

Speaking during the meeting, Medical Association of Tanzania (MAT) president Elisha Osati urged the government fast-track a law which will ensure that all Tanzanians are covered by health insurance schemes.

He also asked for the governmentâ€™s assistance in the construction of MAT headquarters estimated to cost Sh3 billion.

President Magufuli was speaking yesterday in Dar es Salaam during his meeting with doctors and other medical practitioners ahead of Doctors Day, which will be marked on March 4.