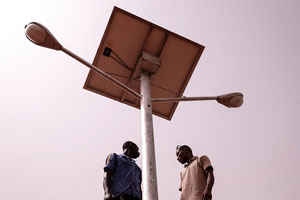 The power generators are essential for both home and businesses in cities across the continent, even in the economic hubs of Lagos, Nigeria, and Nairobi, Kenya. Almost two-thirds of Africa’s 1.2bn population lack access to electricity and, according to the African Development Bank (AfDB), annual power consumption in sub-Saharan Africa per capita is 181 kilowatt hours (kWh), compared with 6,500 kWh in Europe and more than double that in the US.