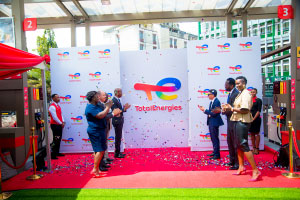 The company also launched its 1st solarised service station at the TotalEnergies Samora service station in the city in an effort to give users an opportunity to enjoy products and services powered by solar energy.

The company introduced its TotalEnergies image in Tanzania in May 2021 in its ambitious plan to become a worldâ€“class player in the energy transition.

The new name and new visual identity of TotalEnergies embodies the company as a broad energy player that is committed to producing and providing more affordable, reliable and clean energies to as many people as possible. Speaking during the event, the TotalEnergies Marketing Tanzania Ltd managing director, Jean-Francois Schoepp said the ongoing transformation plan was in line with the firmâ€™s wider goal of cutting carbon emission.  â€œIt is with great honour and pride that we are here today to reveal our milestone and ambition as the first Oil Marketing Company in Tanzania to have solarized service stations which is in line with our climate ambition to have net zero carbon emission and a reflection of our transition from Total Tanzania Ltd to TotalEnergies Marketing Tanzania Ltd,â€ he said.

He said so far, the company has set up 24 solarised stations in the country.

It has an ambitious target to solarise up to 68 service stations by the end of 2022 as well as its industrial sites such as its Dar es Salaam terminal and itâ€™s Lubricants Oil Blending Plant.  With this target, the company expects a production of close to 900 kW of electricity on a full year. Gracing the event, the Minister for Energy, Mr January Makamba said the transformation of Total to TotalEnergies marked a tremendous development in Tanzaniaâ€™s energy sector, saying it was an indication that the country could fuel up with sunlight, enjoy a beverage made by solar power and even recharge their batteries at the speed of light when at TotalEnergies service stations.