Modular homes are making a grand entrance in South Africa 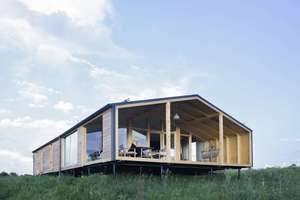 The move from free-standing homes can be linked to high property prices – which shows that South Africans living in the country’s most populated provinces can expect to pay well over a 1 million rand for a home.

As owners opt for townhouses and flats over free-standing properties South African homes are becoming smaller.

Most people use them as their main home, from a starter home to retirement and everything in between. They are also popular as holiday homes. The normal housing regulations are used for the modular system, and its timber frame based and complies with the SABS and SANS regulations.

According to a new Stats SA building report, on an average eThekwini (Durban) has the largest homes when measured by square metre, while property in Cape Town seems unusually small – at an average of only 106 square metres.

Many are left with no option but to turn to expensive rentals or alternative living arrangements, as rates and taxes continue to rise and the cost to own remains unaffordable for a large portion of the population.

One such option is a modular home – low maintenance, pre-designed homes which ship fully fitted and finished.

But if you are in KZN around R1,000 square metre more may be expected, while the cost for those in Johannesburg and the surrounding areas can can go up by around R2,000 more.

This does not take into account the building time or the running cost of the house, which includes air-conditioning and heating. The homes are built from 15 square metres up to 400 square metres currently, with most of these being two bedrooms and one bathroom.

So, are prefabricated homes the way into the future? Only time will tell.