New US $30m Office Complex For Road Authorities In Kenya 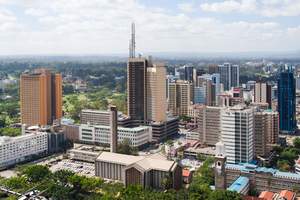 The Kenya government in partnership with the World Bank is funding the construction of a mega project which is being developed by Chinese firm-Aviation Industry Corporation of China (AVIC). The US $30m road authorities office complex in Nairobi, Kenya is currently 40% complete is expected to be  ready for occupation in late 2018.

KeNHA director-general Peter Munindia confirmed the reports and said that the project is set to host employees of KeNHA, Kenya Rural Roads Authority, Kenya National Highways Authority, Kenya Urban Roads Authority, Kenya Roads Board and Engineers Board of Kenya. He added “Several institutions have been established since the Kenya Roads Act was enacted in 2007. However, these institutions have been housed in private premises which, as public institutions, they are hard pressed to afford,”.
The complex is being built on an area of nine-acres in Embakasi near the Jomo Kenyatta International Airport (JKIA). It is planned with a gross floor area of 35,000 square metres consisting of lower ground floors, suspended floors and also includes a conference facility housing a 500-seater auditorium.
Construction began in March 2017.