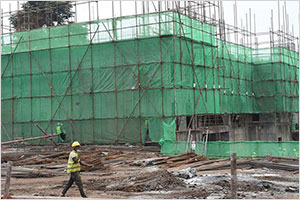 Budget estimates tabled in Parliament show that Sh8 billion has been allocated for the affordable units in the year starting July.

Treasury has doubled the allocation for construction of affordable houses as the State races against time to deliver the low-cost units in President Uhuru Kenyattaâ€™s last year in office.

Budget estimates tabled in Parliament show that Sh8 billion has been allocated for the affordable units in the year starting July, a 90 per cent jump from Sh4.22 billion in the current year.

This Sh3.78 billion increase comes in President Uhuru Kenyattaâ€™s last year in office in efforts to deliver one of the head of Stateâ€™s pet projects ahead of his retirement.

The State is targeting to construct 500, 000 low-cost units by end of next year under the Big Four Agenda.

Affordable housing is one of the â€œBig Fourâ€ policy agendas in Mr Kenyattaâ€™s legacy term which ends in August 2022. The other sectors are manufacturing, food security and universal healthcare.

The allocation will fall to Sh4.22 billion in each of the next two financial years from July 2022 signalling that the State is keen to deliver the bulk of the houses in Mr Kenyattaâ€™s last year in office.

The houses target in Nairobi, Mombasa, Kisumu, Nakuru and Eldoret will see the State demolish informal units mainly in the slums.

The units are three bedroom, two-bedroom and one bedroom houses where buyers will pay in installments after making the first deposit.

The State and counties have tapped international partners and the private sector in efforts to deliver the units due to budgetary constraints.

The British government early this year pledged Sh8 billion to fund the construction of affordable houses. The funds will be disbursed in tranches.

The UK funded InfraCo will pump Sh1 billion and another Sh7billion will come from private investors, both coming in as part of the UK governmentâ€™s investment on infrastructure in Africa.