The Nairobi Expressway is getting its finishing touches. 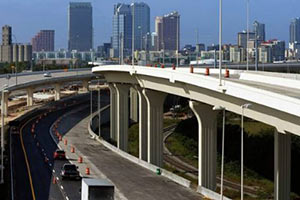 The Nairobi Expressway project, which has been in the works since mid-2020, is almost finished, ushering in a new era in Kenyan road construction.

The contractor is presently putting the finishing touches on the 27.1-kilometer elevated roadway, according to the Kenya National Highways Authority (KeNHA), in preparation for a scheduled test drive that would clear the way for the road's formal inauguration.

'Guided trials to test the operations of the system that has been installed will be conducted as the contractor nears completion and in preparation for the ultimate opening of the road to the public,' KeNHA said in a statement on Tuesday.

The Nairobi Expressway roadway begins at Mlolongo, connects Jomo Kenyatta International Airport to the CBD, and ends in Westlands at James Gichuru. It is projected to be operational in the next three months.

The proposal comes after Kenya and China Road & Bridge Corporation (CRBC) signed an agreement for the latter to act as a concessionaire on the project.

Kenya and China Road & Bridge Corporation (CRBC) signed an agreement for the latter to act as a concessionaire for the project.

Toll money paid by cars utilising the road will help CRBC repay its investment. Along the road, there will be ten tolling stations.

'Investors in the project will recuperate their expenditures through small pay-as-you-go toll booths.' 'The highway is planned to service at least 25,000 cars every day,' according to the President's Delivery Unit during the project's launch.

The Nairobi Expressway is designed so that the first 15.5 kilometres (from Mlolongo to Nextgen Mall) are built at grade level, followed by an 8.5-kilometer elevated section (from Nextgen Mall to St. Mark in Westlands) and a 3.6-kilometer ground-level section (from St. Mark to James Gichuru junction).

The elevated roadway begins at the Ole Sereni Hotel and goes along Uhuru Highway through the CBD until it reaches the James Gichuru intersection. The elevated route runs beneath Haile Selassie Road, Kenyatta Avenue, and University Way.

The Nairobi Expressway is being developed at a cost of Sh88 billion as part of KeNHA's ambition to enhance the road between JKIA to Rironi.

The project was initiated just three years after the state shelved plans for an elevated route, which was anticipated to cost Sh38 billion at the time.

A segment of Nairobi citizens have previously voiced worries about the double decker road's potential for sight impairment.

At the same time, business owners and landlords who live near the highway have raised concerns that if it is built, it will depreciate their properties.

These concerns were thought to be one of the reasons why the administration chose to investigate other options for reducing traffic congestion on the popular road.

In February 2018, a top KeNHA official remarked, 'The segment near Uhuru Park would not have an overpass, so as not to create visual intrusion.'

The World Bank and the African Development Bank would fund a 43.5-kilometer toll road from JKIA to Rironi at a cost of Sh59 billion, according to the agency.

These ideas were eventually scrapped, and the state moved on with the elevated highway project against professional advise from numerous parties.

Elevated roadways, formerly touted as a way to decongest cities, are now viewed as 20th-century infrastructure disasters, and several wealthy countries are deconstructing them.